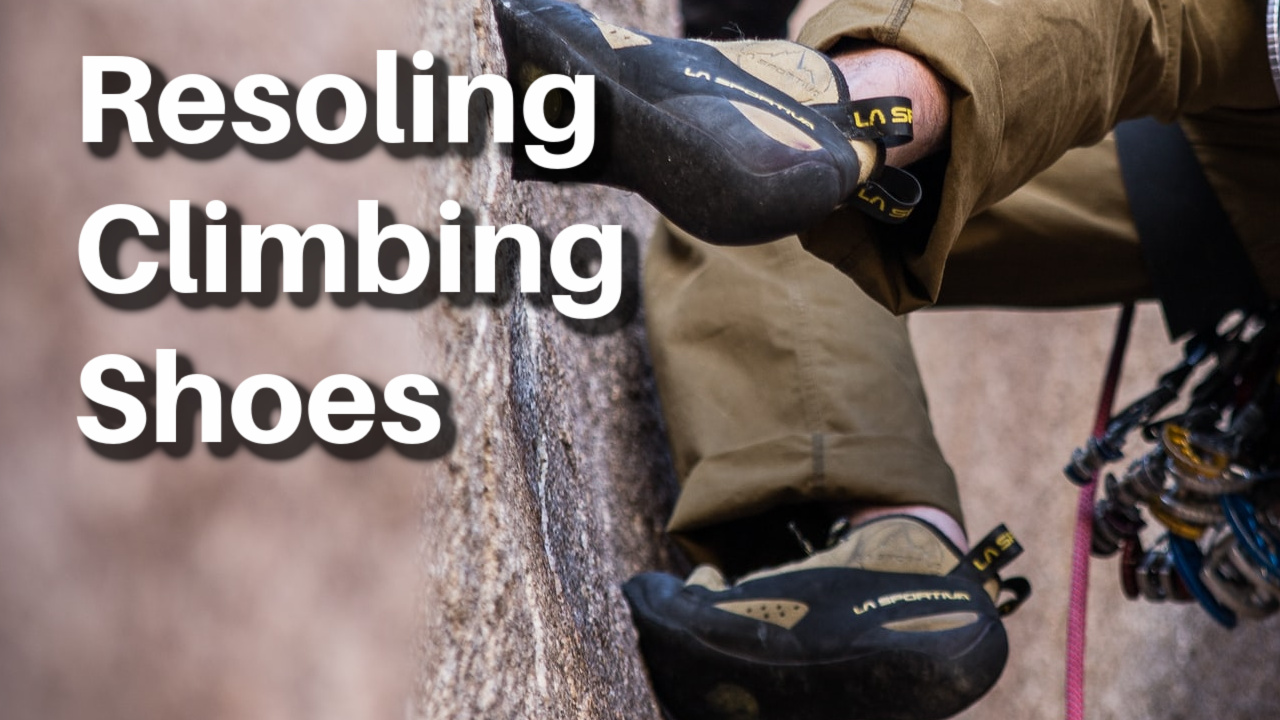 I have friends that I climb with that refuse to resole their climbing shoes, saying it is never the same shoe. I have had it done on multiple pairs, and while it does take a little adjustment, it’s way better than breaking in a new shoe!

In this article we’ll talk about the benefits of resoling a shoe, when you should do it, a climbing shoe rubber comparison, and other common questions surrounding the topic!

What Does Resoling a Climbing Shoe fix?

While resoling a climbing shoe might sound self explanatory, there are a lot of things that go into the process. Basically, resoling means you’re completely replacing the soleof a climbing shoe with new components. Typically a shoe will last anywhere from 6 months to 3 years (depending on how hard you climb), and finally when it wears out, the rubber is so thin that it can’t be fixed or re-wrapped.

There are two components that make up the sole of a climbing shoe, the outsole and the rand.

As will all shoes, the outsole is the part of the shoe walked on, or in our case, climbed on. It is made of rubber, is glued to the shoe, and is replaceable. Typically you can tell it’s time to replace when the rubber starts to get extremely thin.

There is a line that divides the rand from the sole, pay attention to that line!

When to Resole a Climbing Shoe

Speaking of that line that divides the rand from the sole, that is the best indicator that it is time to resole your shoes. This is because the rubber becomes much thinner as you get closer to the rand.

Continuing to climb on the rubber of the rand can lead to more costly repairs or actual damage to the structure of the shoe.

You can get a rand repair, but this adds additional cost to the resole and can be avoided by paying a little more attention to the wear on your climbing shoes!

How Much Does Resoling a Climbing Shoe Cost?

Resoling climbing shoes is not cheap, and actually varies from place to place based on material costs. Many of the best shops allow you to mail in your shoes and then get them back 3-8 weeks later (depending on the repairs).

Expect to pay anywhere from $40-50 dollars for a pair of shoes. Considering a good pair of shoes is often $200, this doesn’t sound like such a bad option!

If you’ve climbed on your shoes too long and damaged the toe cap or rand, toe caps often cost around $10/per shoe and custom rand repairs can be even more expensive.

We are fairly lucky and live near the Rock and Resole shop, but most reputable resolers have a mail in program available for those who don’t live close. You can also ask your local climbing gym, they often will know of someone locally.

What is the Best Rubber for Resoling Climbing Shoes?

Maybe the best part of resoling climbing shoes is the fact you get to chose your new rubber compound, something you can’t do when you originally buy the shoes. Along with the type of rubber, you should also consider the thickness of the rubber you want.

A sole that is 4mm-5mm thick is considered to be a thick sole on a climbing shoe. The benefits of climbing on a shoe with a thick sole are that you get the added stiffness, shock absorption and comfort of the shoe.

On the flip side, because they are stiffer you sacrifice some edging ability. In general, a thicker sole is better for beginners and trad climbers who either are not used to the impact climbing has on their feet, or need a stiffer shoe.

On the flip side, thin soles range from 3mm-3.5mm are all about performance. These shoes are often paired with softer rubber, giving you a sticky surface that allows you to really feel the rock under your foot.

Indoor climbing and bouldering are where these shoes will really shine.

Vibram has long been the go to rubber for most mountaineering shoes, including a wide variety of hiking boots and climbing shoes. In 1988 they developed Vibram Grip, a rubber specifically made for free climbing. The rest, as they say, is history.

Vibram XS Grip
The original rock wall climbing rubber, the XS grip is a semi stiff compound that is fairly versatile. This is still the all around best rubber Vibram offers, with the other three improving on specific performance features that make them better for certain specialties of climbing.

Vibram XS Grip2
The Grip 2 is softer than it’s predecessor, making it a stickier compound while actually being more durable. Many La Sportiva and Scarpa shoes use this rubber as their sole compound, especially the higher end models.

When I resole my outdoor climbing and bouldering shoes, this is often the rubber I chose!

Vibram XS Edge
As the name would apply, this compound was specifically designed for climbing requiring great edging. The XS Edge will often be found on big wall and multi-pitch shoes that need a stiff, performance compound.

Vibram XS Flash
A purely indoor compound, the Flash won’t mark walls and is extremely soft. The friction you are able to get from these shoes makes them perfect for challenging indoor bouldering problems.

When comparing the Vibram XS Grip vs Grip 2 vs Edge vs Flash you need to realize they are made for different purposes and styles. The XS Edge is the hardest and stiffest, the Flash is an indoor only compound that is extremely soft, the original XS grip is the all around compound while the Grip 2 is great for outdoor performance.

If you want performance, it’s hard to beat the Five Ten Stealth Rubber lineup. Many of the leading climbing magazines like Rock and Ice, Nat Geo, and Climbing magazine list Stealth as the highest friction rubber on the market.

Stealth C4
The most widely used Five Ten compound, the C4 is comparable to the XS Grip 2 with a little more stick and a little less durability.

The big complaint with the Stealth lineup of rubbers is that they aren’t very durable, but this is the most well rounded and durable of the trio!

Stealth Mi6
The Mi6 is a super soft, sticky rubber that is perfect for high difficulty bouldering problems and smearing. As soft as this rubber is, it is actually the middle option in the Stealth line.

Unlike Stealth or Vibram, Trax is pretty much only found on the Evolv line of shoes. Don’t take this lack of popularity for lack of performance though, Trax was developed by a group of Ph.D’s and is a great option for your resoling project.

Trax SAS
This is a great all around option and the most common Trax rubber compound. This rubber is comparable to the XS Grip 2 and the Stealth C4. From a performance standpoint we think this compound doesn’t quite provide as good of friction as it’s competitors, but it is more durable.

Trax XE
The Trax XE is super stiff and designed for granite, slab, and big wall climbs where you want a solid rubber that is good at edging. You’ll only find this on the aggressive, high-performance shoes in the Evolv lineup.

Trax GT
This compound competes directly with the Vibram Flash, this is an indoor rubber compound designed for plastic molds and gym climbing.

FriXion Black
The Black is designed for entry level, budget shoes like the Tarantulace and Oxygym. While it’s advertised as a super sticky compound, we really didn’t like these outside on rock walls. This is unfortunate since their other compound is specifically an indoor rubber.

Frixion White
Just like the Trax GT and Vibram Flash, this non marking rubber is designed for indoor climbing only.

As you can tell, you have a lot of options when picking out a rubber for your shoes resole. Not only is their a lot of variance between the different compounds, things like weather, temperature and weight play a part in performance.

When comparing the different rubber compounds you will need to try them out in different conditions. At home and on the wall the XS Grip may work great, but it won’t hold up as well outside. Likewise, the Trax Rubber will be excellent in gym conditions, but the XS Edge may perform better in real world conditions.

The Stealth lineup of rubber tends to be stickier than many of your other options, but you’ll likely be replacing these soles quicker as well!

What Can I do to Make my Climbing Shoes Last Longer?

Since resoling isn’t cheap and new climbing shoes are even more expensive, it makes sense you’ll want to make your shoes last as long as possible.

The first thing you can do is to take them off when you aren’t climbing. Walking on them or simply sitting around in them will damage the rubber faster and hurt the structure of the shoe.

Next, keep your shoes dry and clean. If you don’t need to clean them after a trip, leave them indoors. Moisture will make the glue deteriorate faster. You can also rub your soles down with alcohol and vinegar before you start climbing outdoors. This will keep dirt and debris from sticking to the soles and damaging them.

Finally, keep your shoes as dry as possible. Moisture can effect the soles, the structure, and also the smell of the shoes.

Resoling Climbing Shoes can be both a daunting and confusing process, but it doesn’t have to be. While we have outlined why it is important to get your shoes resoled and how you can speed up the process, we also want you to know that not all shoe resoles are created equal.

When comparing rubber compounds for climbing shoes, you may have a budget shoe that is more durable, or an aggressive shoe that can perform at the highest levels in all conditions. Either way, there is a rubber compound for you. We hope this guide has helped you understand why different compounds are better for certain situations.